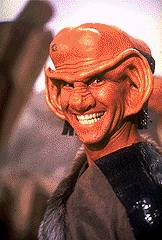 Technologically sophisticated humanoid civilization that was long a complete mystery to the Federation prior to first contact at planet Delphi Ardu in 2364. Originally from the planet Ferengar, by the 24th century, the Ferengi were an interstellar culture. It took the Ferengi 10.000 years from the time they first started using currency to establish the Ferengi Alliance. The Ferengi extended their culture on an interstellar scale by buying warp drive technology. It's not know from whom they bought warp drive. Possesing a strict code of honor, Ferengi philosophy ruthlessly embrace the principles of capitalism. Ferengi culture finds the concept of organized labor to be abhorrent, since such things can interfere with the exploitation of workers. Similarly, Ferengi labor contracts never provide for sich leave, vacations, or paid overtime for employees. Ferengi consider the sanctity of a contract to be a cornerstone of their civilizion. Breaking a contract in unthinkable, and will generally result in the offender having his Ferengi business license revoked and all of his assets seized, and him becoming a pariah in Ferengi society. The Ferengi are sexist in the extreme, and do not allow their females the honor of clothing. In addition, Ferengi females are kept house-bound, uneducated, and wholly dependent on their male counterparts. It is illegal for Ferengi females to earn profit, or to quote from the Rules of Aquasition. They are also forbidden to travel or talk to strangers. Ferengi tradition requires the females of the family to prepare and serve meals, and to soften the food for the males by chewing it for them. Interestingly, Ferengi males often find human females very attractive. Ferengi consider pregnancy to be a rental, with the father being termed the lessee. When a young Ferengi reaches adulthood and prepares to leave home, he traditionally raises capital by auctioning his boyhood treasures. Betazoids are incapable of empathically reading Ferengi minds. This may be due to the unusual four-lobed design of Ferengi brains. Dopterians, whose brains are structurally similar to those of the Ferengi, are similary unreadable by Betazoids. Ferengi have ascending ribs and an upper and lower lung. Shortly after first contact with the Federation, Ferengi entrepreneurs saw new opportunities and quickly assimilated themselves into Federation commerce, such as Quark, a Ferengi who established a bar at Deep Space 9. The Ferengi are not members of the Federation. Ferengi entrepreneurs served as intermediaries for the Karemma in commerce with the Federation. The Karemma sought this arrangement because the Dominion would not have tolerated direct trade with the Federation. One Ferengi quotation says, "Never ask when you can take." Another Ferengi saying is, "Good things come in small packages".