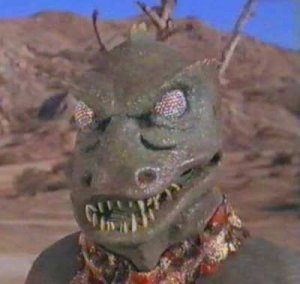 Some time after the Cestus III outpost was founded, rumours began to circulate of some strange goings on. Peculiar subspace messages were said to have been received, although none were confirmed and little official notice was taken. In 2266, the Cestus III outpost was destroyed by a spacecraft which approached and opened fire without warning. The USS Enterprise was subsequently lured into an ambush by the ship, but managed to force it to retreat. The Starship pursued its attacker, but before the two could engage one another again a mysterious species calling themselves the Metrons intervened. The Metrons stranded Captain Kirk and the Captain of the alien vessel on a nearby planet, insisting that they finish the battle personally. The being Kirk found himself fighting resembled a humanoid lizard, cold blooded, approximately six feet tall with green skin which looked almost rubbery. The face had two widely spaced nostrils and a pair of compound eyes. The creature - which the Metrons called a Gorn - proved to be immensely strong and virtually immune to physical attack. Kirk did discover one physical weak spot - the Gorns ears are apparently highly sensitive to even relatively light blows. The Gorn was also extremely slow compared to Kirk, and the Captain was eventually able to fashion a weapon out of local materials and incapacitate it. During the combat the Gorn claimed that the Federation had intruded into space belonging to his government. When Kirk finally defeated his enemy he refused to kill him, instead telling the Metrons that the Federation would prefer to negotiate a peaceful settlement with the Gorn. The negotiations did occur shortly afterwards and eventually a peace treaty was signed. The Federation has maintained reasonably friendly relations with the Gorn ever since.