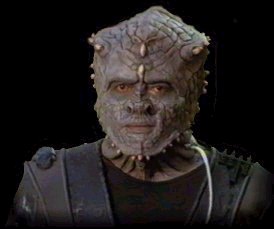 The Jem'Hadar live purely for combat and are completely loyal to the Founders. Before entering into battle they perform a ceremony and recite the following:

"I am dead. As of this moment we are all dead. We go into battle to reclaim our lives. This we do gladly because we are Jem'Hadar. Remember, Victory is life."

So total is the Jem'Hadar belief in the god-like nature of the Founders that they will do anything commanded of them by a Founder. If they fail a Founder in any way, they will commit suicide. Ketracel-White is the only thing the Jem'Hadar need, therefore they do not eat. Relaxation would only make them weak, so they do not sleep. The Jem'Hadar are born in birthing chambers so there is no need for female Jem'Hadar. Once born, they mature at an extremely rapid rate and are able to fight within three days. Very few Jem'Hadar live to be fifteen years old and none have ever reached 30 years old. A Jem'Hadar of 20 years is an honored elder.