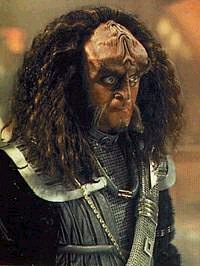 Humanoid warrior civilization, originally from the planet Qo'noS; a proud, tradition-bound people who value honor. The aggressive Klingon culture has made them an interstellar military power to be respected and feared. There is no equivalent of the devil in Klingon mythology, although a beast known as Fek'lhr is believed to guard the underworld of Gre'thor. According to myth, ancient Klingon warriors slew their gods a millennium ago. They apparently were more trouble than they were worth. Perhaps this is why the Klingons have no devil; they killed him. In Klingon society, the death of a warrior who has died honorably in battle is not mourned. In such cases, the survivors celebrate the freeing of the spirit. Klingons believe in an afterlife but there is no burial ceremony. They dispose of the body in the most efficient means possible, confident that the warrior's spirit has now joined Kahless the Unforgettable in Sto-Vo-Kor. Klingon tradition holds that "the son of a Klingon is a man the day he can first hold a blade." Another Klingon ritual is the R'uustai, or bonding ceremony, in which two individuals join families, becoming brothers and sisters. Klingons believe that they have the instinctive ability to look an opponent in the eye and see the intent to kill. Klingon tradition holds that a Klingon who dies by their own hand will not travel across the River of Blood to enter Sto-Vo-Kor. If a Klingon warrior strikes another with the back of his hand, it is interpreted as a challenge to the death. Klingon warriors speak proudly to each other; they do not whisper or keep their distance. Standing far away or whispering are considered insults in Klingon society.

The Klingon body incorporates multiple redundancies for nearly all vital bodily functions. This characteristic, known as brak'lul, gives Klingon warriors enormous resiliency in battle. Despite the considerable sophistication of Klingon technology, significant gaps exist in Klingon medical science, in part due to cultural biases that injured warriors should be left to die or to carry out the Hegh'bat. Klingons have redundant stomachs. Klingons have no tear ducts. Klingon blood is a lavender-colored fluid.

The capital planet of the Klingon Empire. A large, green, Class-M world, the homeworld was rarely referred to by its formal name, Qo'noS (pronounced kronos). The Enterprise-D visited the planet in 2366 when Worf challenged the High Council ruling that his father, Mogh, was a traitor. The ship visited the homeworld again in late 2367 when Jean-Luc Picard attended the installation of Gowron as High Council leader. Picard had served as Gowron's Arbiter of Succession. The Enterprise-D again returned to the Klingon Homeworld a few weeks later, when Picard requested the loan of a Klingon bird-of-prey for a covert mission into Romulan space to investigate the disappearance of Ambassador Spock.