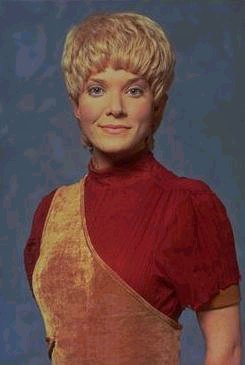 The Ocampa are natives of the Delta Quadrant; they where first encountered by the USS Voyager after that ship was dragged into the region by the entity known to the Ocampa as 'The Caretaker'. Ocampa are humanoid, tending to average approximately 165 cm tall. After birth they mature very rapidly, reaching adulthood within months. By the end of their fourth or fifth year Ocampan females enter the Elogium, when they become fertile for the only time during their lives. During the Elogium a mitral sac forms on the females back ready to house the embryo, and the ipasaphor appears on the palms of their hands. By their seventh year Ocampa are entering old age; they generally live to eight or nine, although some Ocampa living under unusual environmental conditions have been known to reach fourteen years of age.

At the time of their encounter with the crew of Voyager, most of the Ocampa species had lived in an underground city for the last thousand years. Here, sheltered from the harsh conditions on the surface, the Ocampa lived a life of ease under the guidence of the Caretaker. Although this culture was remarkably stable and peaceful, many of the younger citizens yearned to penetrate to the surface to explore. One such Ocampa, Kes, did in fact manage this only to be captured and enslaved by the Kazon. When the Caretaker died he had stocked the energy reserves of the Ocampa city with sufficient energy to sustain it for five years; after this time they will have to fend for themselves once more.

Although Ocampa have formidable PSI powers, the city dwellers had long ago allowed these abilities to fade through lack of use unti they had become all but a myth. However, once Kes had the chance to experiment on board Voyager she began to develop telepathy, telekinesis, precognition and pyrokinesis. Other Ocampa encountered by Voyager had developed these abilities to a tremendous degree, although their powers may have been externally enhanced by the alien being known as Sisperia.

Unfortunately, it seems likely that nothing will ever be known of the fate of the Ocampa. With their home city due to run out of energy in 2376 it is probable that the Kazon will overrun the Ocampa and enslave or destroy them. On the other hand, many societies have demonstrated considerable resiliance when faced with a threat to their freedom, and it is possible that in the long run the loss of their dependance on the Caretaker will prove to be a very positive factor in the development of the Ocampa.