Yesterday Paramount announced that J.J. Abrams is going to be the producer and director of the next Star Trek XI movie. The movie is scheduled to be released in 2008. Abrams has produced the series Lost and Alias and the movie Mission: Impossible III.

Prize question and Star Trek on the beach

Today, James Doohan who played the chief engineer of the Starship Enterprise passed away at the age of 85. Doohan was suffering from pneumonia and Alzheimer's Disease.

A lot of small updates today, see here it goes: 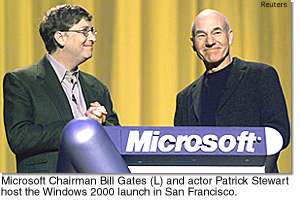 A movie of the event can be found at Microsoft's site on this page.

In a small article in next weeks edition, Veronica's TV Guide takes a look at the ratings of the various Star Trek series on television in Holland. As can be expected, the Voyager broadcasts on Netherlands 2 score the highest ratings. On average, about 340.000 viewers watch Voyager on Netherlands 2. Although the Voyager episodes on the BBC are a few weeks ahead of the Dutch episodes, they only attract about 29.000 viewers.