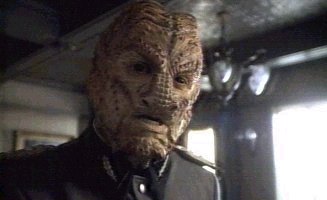 The Hirogen are an extremely aggressive race from the Delta Quadrant. They can reach the height of over 9 feet and their physical strength is many times greater than that of a human. The Hirogen are easily identified by their body armor, it allows them to survive in the most hostile enviroments. A powerful Nomadic species occupying the Delta Quadrant, the Hirogen are very predatory race. They travel in small ships carrying only two or three persons, seeking out other life forms in order to hunt them. They are obsessed with gathering trophies - usually in the form of body parts or stolen technology - in order to demonstrate their hunting prowess to other Hirogens. Although technologically advanced, they have been forced to disperse themselves over a huge area in order to find new prey for their hunts. This has put considerable strain on the Hirogen culture, and their society is now seriously deteriorating. Technologically advanced, the Hirogen have shown themselves capable of defeating an injured member of Species 8472. They were encountered by the crew of the USS Voyager in 2374, when the ship accessed a Hirogen controlled communications array in order to transmit its EMH to the Beta quadrant. A Hirogen hunting vessel subsequently captured Lieutenant Commander Tuvok and Seven of Nine. Voyager was able to free the two crewmembers, and was also able to use the array to recieve over a hundred messages from Starfleet command.