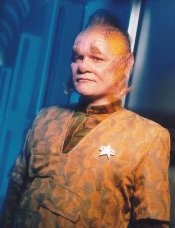 A humanoid civilisation native to the planet Talax in the Delta Quadrant. Externally Talaxians are identifiable by the distinctive yellow colouration of their skin and the ridges of bone on their skulls, (see associated image). Internally, the major difference between Talaxians and Humans is in the lung system; Talaxian lungsd are directly linked to the spinal column at multiple points. Talaxians tend to be a very enthusiastic and friendly people, quick to trust others and easy to get along with. They have few enemies, although in 2346 they entered into a war with the Haakonian Order. After ten years of fighting the Hakkonians used a Metreon Cascade weapon on Rinax, killing some 300,000 Talaxian colonists of that moon and prompting the Talaxians to surrender. Many Talaxians who came into contact with the fallout of the weapon subsequently developed metremia, a fatal blood disease. Talaxians have had relatively little contact with Humans, although one individual has served as Morale Officer for some years aboard the USS Voyager (Neelix).